The official rules and regulations of the Intel Arabian Cup cover all you need to know about the eligibility requirements, the team roster, the brackets and tournament formats, and are applicable to any person wishing to participate.

These official rules are designed solely to ensure the integrity of the system established to play League of Legends and a competitive balance among the Teams that play.

IAC 2021 will feature two divisions - the Champions League, which includes the top 8 teams from IAC 2020 (and any new teams that advance to the League in coming seasons); and the Competitors League, which will be preceded by Country Qualifiers where teams from 15 countries will compete in order to advance to the next stage (more information about the structure of each stage below).

No Player shall be considered eligible to participate in any IAC Tournament Match before having lived 13 full years or before reaching the eligibility age to play in a League of Legends Tournament in their residency country whichever is highest.

All participating players MUST have access to the email linked to their account they register with. Participants will receive tournament codes sent to their email.

Players who are minor in their country of residence are required to provide parental consent to be eligible to Play in the IAC Tournament.

Players may not be employees of Riot Games Inc. (“RGI”) or any of its affiliates. “Affiliate” is defined as any person or other entity which owns or controls, is under the ownership or control of, or is under common ownership or control, the named Riot entities above. “Control” shall mean the power, through any means, to determine the policies or management of an entity, whether through the power to elect, appoint or approve, directly or indirectly, the directors, officers, managers or trustees of such entity or otherwise. This restriction applies to any employee of Vendors and Sponsors and affiliates of vendors and sponsors related to the IAC Tournament.

Players registered in the League of Legends Esports League-Recognized Contract Database at the date of registration may not be eligible to play in the IAC Tournament.

2.2.2. A Team’s Roster can have a maximum of eight players and a minimum of seven players.

2.2.4. In the case of extenuating circumstances, such as temporary visa issues, a competitive suspension or a medical emergency the roster requirements may be waived temporarily. Grant of this waiver is at the sole discretion of the Tournament Organizer.

2.2.5. The proposed team name entered upon registration may be in English or Arabic; however, it may not be offensive, racist or sexual in nature. If found to be in violation of this rule, the team will be disqualified.

2.2.6. If a team qualifies to the Champions League, their spot shall be reserved for the registered main players (minimum of three) who have secured the win, and not for the club/team they represent. Riot Games is not responsible for players and their teams disputes.

2.2.7 Teams are required to play only with the team members they have registered with. Please note that at this stage all rosters are locked and no further changes can be made. It is also important to note that accounts may not be shared between team members or outside parties.

2.2.8. It is possible to switch substitute players as the team sees fit, as long as it is not in the middle of a given match (however substitutes are allowed in a series).

2.2.9. No changes may be made to any kind of information in your registration application. Any attempt to modify such information will automatically disqualify your team from the tournament.

The top 8 teams in the IAC 2020 Finals will compete against each other again in IAC 2021 on the basis of a BO1 double round robin (home and away) format, following which the top 4 teams will play in a BO5 single elimination bracket format (1st vs 4th and 2nd vs 3rd).

The two lowest placing teams (7th and 8th) will have to play in the Relegation Round on the basis of a BO5 double elimination bracket format versus the top two teams advancing from the Competitors League. The two victorious teams in the Relegation Round will return in the next season as part of the Champions League, whereas the other two teams will come back in the Competitors League.

After the end of each season, points will be awarded to the top 8 teams depending on their placement on the Leaderboard, and these points will add up as we move forward with each season. 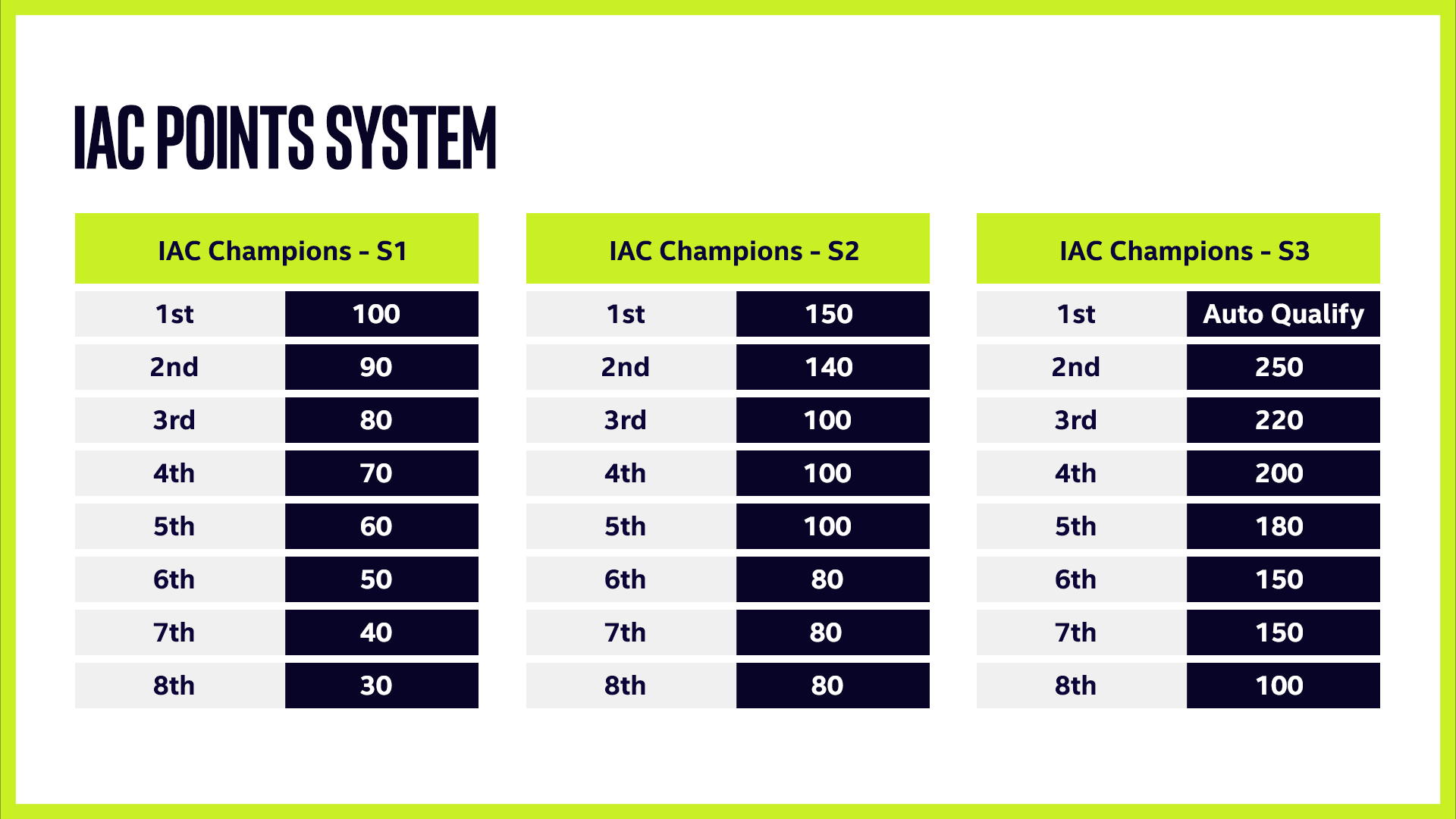 Note: For the teams that acquire points at any given season and are relegated out of the Champions League, they can only keep their acquired points if they submit in the next season a main roster including three of their original main players.

A separate tournament will be held for each of the 15 participating countries, beginning with the Country Qualifiers. The top four teams in each country qualifier (six from the four countries with the highest number of registered teams) will advance to the Competitors League.

Registration for Season 2 opens on 20 May and closes on 4 June.

Country Qualifiers kick off on 6 June and end on 29 June.

The first place teams from each country qualifier will not face off against each other in Round 1 of the Competitors League.

How will the tournament be played and organized?

In Case of 100 Registered Teams:

In Case of 64 Registered Teams:

In Case of 50 Registered Teams:

In Case of 32 Registered Teams:

In Case of 25 Registered Teams:

In Case of 20 Registered Teams:

Please note that the above scenarios are general guidelines and may change subject to the actual number of teams registered in each country.

Foul language, offensive and disruptive behavior, and disregard to the pause allowance rules will not be tolerated from any player and will result in the following at a minimum:

The total amount of prize pool will be $130,000 for the 3 seasons divided as the following: